The Pros and Cons of Constipation 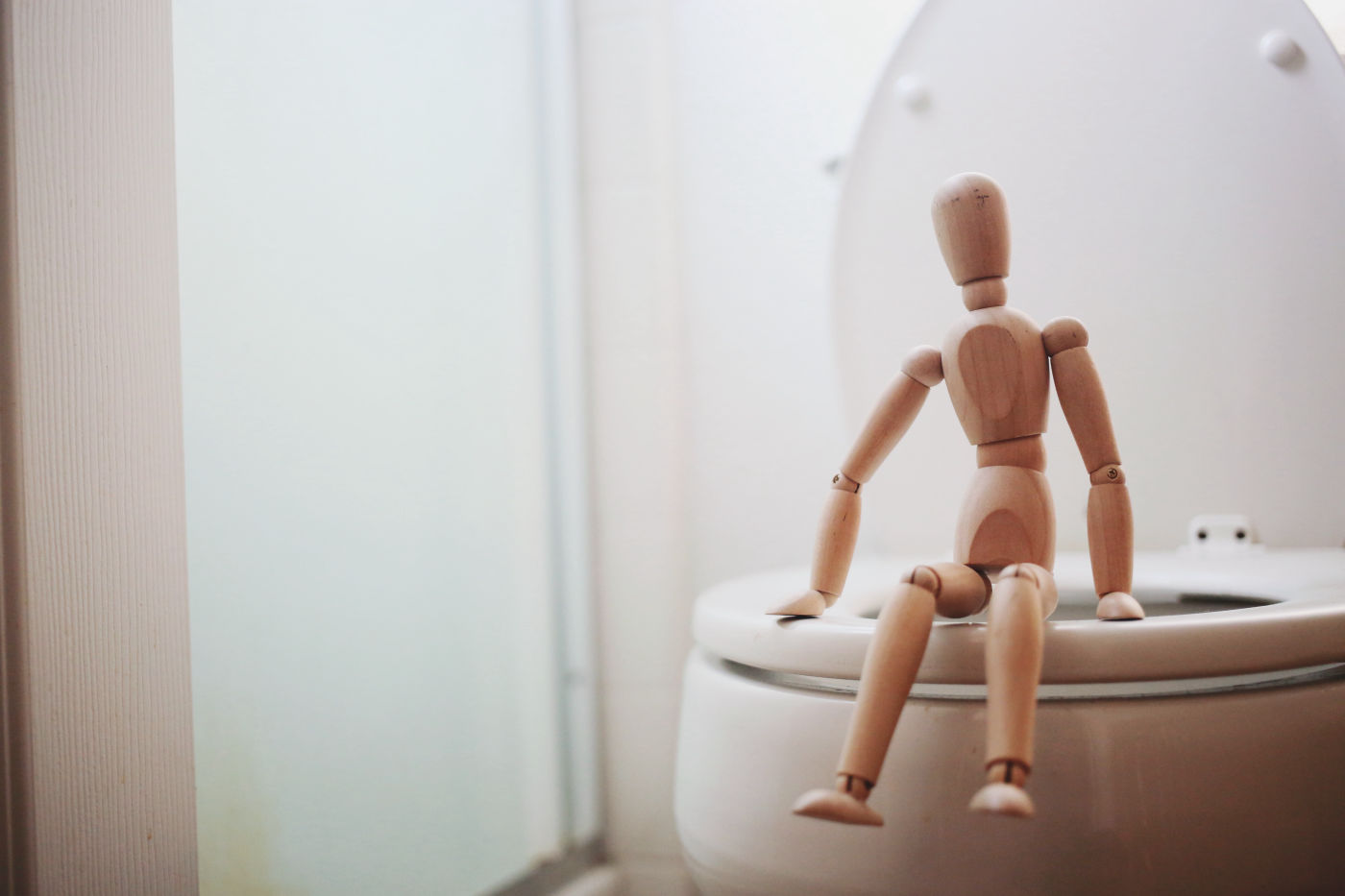 We hear a lot about the cons of constipation in dementia:

But, what about the positives? There’s both good and bad in everything, right?

So, maybe there's something.  But, all in all, not too many pros to constipation.

Many times I have felt like a "Poo Doula".

They're sweating and grunting. Crying. They are working so hard, until — finally —

the birth of the bouncing baby... giant… uh, poop.

Constipation is the pits.

And in dementia care, it doesn't always look like constipation.

It can look like "behavior problems" or “symptoms of dementia”.

Sometimes the constipation is so uncomfortable, it makes the person so restless, it interferes with sleep. And a night or two of poor sleep can wreak havoc on our cognitive abilities — not to mention our emotional states.

Ray was a man with Parkinson’s and chronic constipation. Because he was having bowel movements every couple days, it didn’t occur to the care staff that he was constipated. They didn’t realize that his consistently hard stools indicated a problem.

The restless days and nights, and the frequent fruitless trips to the toilet, were chalked up to his dementia. The discomfort and urge to defecate woke Ray up repeatedly during the night. Over and over it ordered his body to the toilet. Many of the staff felt bad for poor “confused” Ray. (Some felt annoyed at his insistence at going to the toilet so often. “You just went to the toilet and you didn’t do anything. You don’t have to go again.”)

Unsurprisingly, his confusion was worse after a night of disrupted sleep ‒ and by a certain point, most of his nights were disrupted. “His dementia is messing up his sleep cycle,” staff would comment to one another. “Why don’t they give him something to help him sleep?”

His bowel movements were consistently hard to pass. He would struggle at length to produce puny pebbles of stool, Occasionally, he would work up a sweat and pass a medium sized hard lumpy BM, or one so large that it clogged the toilet.

Once the constipation was better controlled, Ray was much more able to sleep through the night. His confusion cleared considerably. And he stopped going to the toilet so often.

The Bristol stool chart is a great resource for recognizing and communicating various stool consistencies. It is used by medical professionals and researchers worldwide. It’s been adapted into hundreds of helpful or interesting variations, including:

Choose Your Poo for Kids

Keeping a log of when bowel movements occur, along with their size and consistency, is good practice for most people with dementia, especially if they have any trouble with constipation. 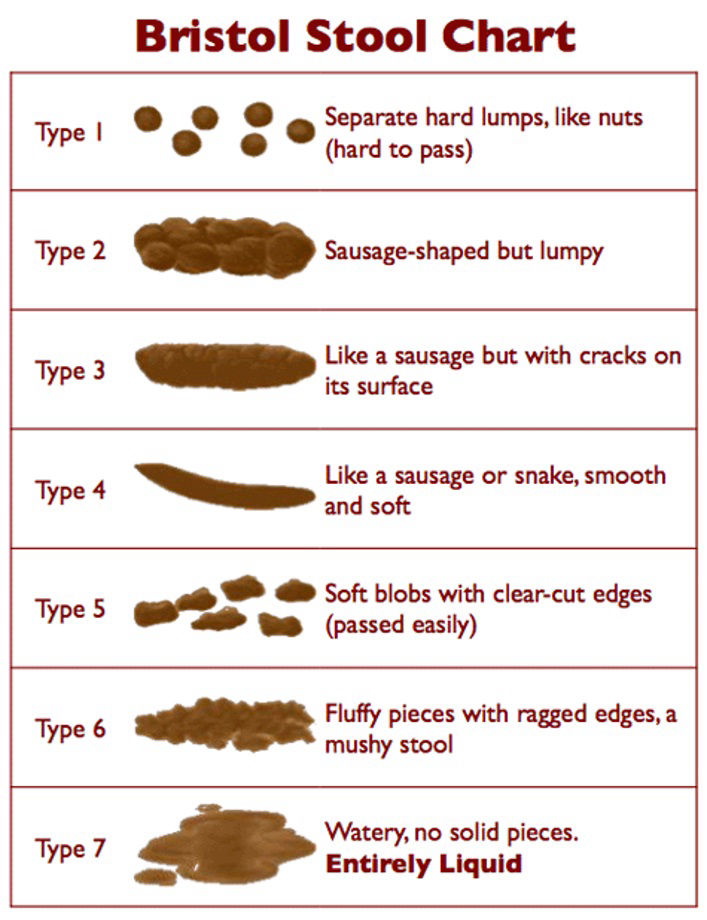 Take note if the person’s stool is hard, lumpy or difficult to pass. Talk to their nurse or doctor about a stool softener or other recommendations. Constipated stools are uncomfortable and they can be dangerous.

Constipation also can cause life threatening medical emergencies such as a bowel obstruction or perforation.

Many Seniors with Dementia are at High Risk for Constipation


Like most problems, preventing constipation in the first place is the way to go. Providing plenty of fluids, a nutritional diet and exercise can go a long way towards regularity.

Dehydration is a big contributor to constipation, so encouraging fluids is extremely important. As we know, many people with dementia aren’t ready drinkers. “Encouraging” them to drink may mean “use all your creativity and energy to entice” them to drink.

Shoot for little sips frequently. Hand them the drink in between other activities.

I think by this point we all know not to ask many people with dementia if they “want” a drink – although asking if they’d rather have "something hot" or "something cold" to drink can still gain ground in some instances.

Cheers! Find something to toast and do it often. One drink together throughout the day will add up to significantly more fluids than they would have taken in otherwise.

Jello and popsicles are both great sources of hydration. Speciality hydration jelly-candies have been developed for this purpose as well.

A good deal of our hydration comes from the foods we eat. Foods like soups, broth, applesauce, watermelon, many fruits and veggies, yogurt and cottage cheese have high water content and can help increase overall fluid intake considerably.


In addition to having a high fluid intake, most fruits and veggies have a good deal of fiber — an important factor in regularity. There are two kinds of fiber — soluble and insoluble — and both are important for regularity.

Soluble fiber dissolves in water into a gel-like substance. It is found in beans, peas, carrots, apples and citrus fruits.

Insoluble fiber doesn’t dissolve in water and can’t be broken down by the body. It increases the bulk of stool, which allows it to pass more easily through the digestive system. Look to whole-wheat flour, bran, nuts, beans, potato skins, and many vegetables as good sources for insoluble fiber.

Probiotics, such as found in yogurt, have also been shown to support healthy digestion. When possible, support a nutritious diet full of fiber and probiotics for people with dementia struggling with constipation.

Note that fiber may have a constipating effect on people who take in too much fiber (usually from supplements) without drinking enough water, and that fiber isn’t always the answer to constipation.

Exercise is one of the major keys to regularity. Aerobic exercise, or anything that gets the abdomen muscles moving, are among the best options. Core exercises, swimming and certain yoga positions are great choices.

Any kind of exercise is beneficial for keeping regular. Walking for even 10-15 minutes can make a big difference. Self-propelling about in a wheelchair, sit-to-stands, chair dancing or seated stretches are also better than nothing.

All exercise or physical movement is helpful, so regardless of the person’s physical state, getting any movement is better than getting none — although, of course, talk to the doctor before starting any exercise program. There may be reasons why a certain exercise is not good for a particular individual.

Allow time on the toilet

People’s individual bowel habits tend to vary from one to another. Some tend to have a bowel movement in the morning, others in the afternoon, still others just once every two or three days. Pay attention to what is normal for each individual.

Sometimes, people with dementia may not want to sit on the toilet long enough to have a bowel movement. They may be restless or distracted. If needed, it can be helpful to encourage them to sit a little longer by doing something to grab their attention or pass the time.

While we don’t want them sitting for too long, sometimes helping them stay put a little longer can spell success.

Stool softeners or medications as ordered

There are plenty of times that diet, fluid and exercise alone won’t be enough to counter the constipating effects of certain medication or medical conditions that affect bowel function. It may be necessary to add a fiber supplement or a medication, such as a stool softener or laxative.

Be careful with laxatives, because the bowel can become dependent on certain types.
Communicate with the doctor about any issues with constipation and all medications.

To Help Pass a Hard Stool or Increase Comfort

Sometimes a warm compress, hot pad or gentle tummy massage can bring comfort to a constipated belly. In fact, there is a lot of research on this topic, and it has been recognized for centuries that abdominal massage can be quite effective in relieving constipation.

Leaning forward slightly while positioning the person’s feet up on a small stool can promote better posture to encourage easy passing and reduce straining. There is a kink in the bowel that “straightens out” in this position, so the stool passes more easily. Positioning the hips beyond 90 degrees in this way does promote easier bowel movements, but obviously don’t do it with someone on hip precautions or who can’t bend their hips to that angle.

The Pros and Cons of Regularity in Dementia

There are plenty of pros to regularity — and not many cons. So, be on the lookout! It can make a big difference in the behavior, comfort and well-being of someone with dementia.

How have your recognized constipation in dementia, or how did you help alleviate it?